Americans Are Renouncing Their US Citizenship. Here is Why

As a record number of Americans renounce their citizenship, the question we have to ask is “why?”

Before 2009, renunciation levels in the United States of America remained under 750 people per year. However, the renunciation rate more than doubled to 1,500 in 2010. In the first nine months of 2020, 6,045 US citizens, gave up their citizenship. 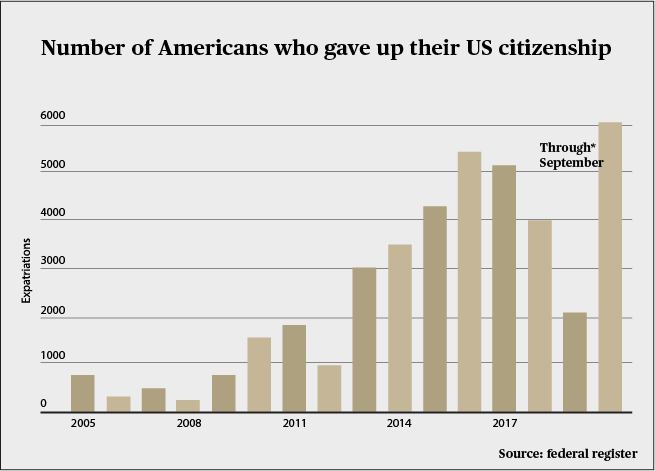 The number of Americans renouncing their citizenship has continued to grow since 2009, in some years reaching record highs. While the numbers are relatively small compared to the total US population of approximately 320 million, what is remarkable is that these numbers have been, and continue to, grow. As more US citizens renounce, the question we have to ask is “why?”

Why Are So Many Americans Renouncing Their Citizenship?

The current tax laws and the reporting, filing and tax obligations that accompany them are onerous and costly, particularly if you are an American expat residing in a foreign country and have to pay double tax. According to data from the US State Department, about nine million American citizens reside in foreign countries.

Many Americans choose to renounce their citizenship, not just because of the money, but because they find the tax compliance and disclosure laws inconvenient, onerous and even unfair.

Other reasons for renouncing citizenship include the lowered passport ranking, personal or political causes such as opposing a war or objecting to a political party, becoming a citizen of a different country, fighting in a war for another country against the US or attempting to overthrow the US government.

Contact our team for a free consultation: [email protected]

What Does the US Law Say?

Section 349(a)(5) of the Immigration and Nationality Act details a US citizen’s right to renounce his or her citizenship by voluntarily “making a formal renunciation of nationality before a diplomatic or consular officer of the United States in a foreign state, in such form as may be prescribed by the Secretary of State,” and by signing an oath of renunciation.

Renouncing US citizenship is complicated and costly, and it involves an interview with a consular officer, a $2,350 administrative fee and potential audit of the last five years of US tax returns.

This process can take up to a year. Once US citizenship is successfully renounced, a tax return to the IRS needs to be submitted the year after, after which, one’s ties with the US are severed.

Read also: Wealthy Americans are Acquiring Second Citizenship as a Plan B

I Renounced My US Citizenship, Now What?

Any bank accounts opened or revenue earned from the date of renunciation does not have to be reported and is not taxable by the US government.

Former citizens of America do not lose their government benefits and continue to receive social security benefits overseas as long as they have worked for at least ten years in the US. However, any pensions from the military or other work for the US government will not be paid.

Do I Need a Second Passport Before Renouncing My US Citizenship?

If you intend to renounce your US citizenship, you should be aware that, unless you already possess a foreign nationality, you may be rendered stateless. Thus, lack the protection of any government.

You may not be entitled to a passport from any country, which would make travel difficult. Statelessness can present severe hardships, including the ability to work, marry, own or rent property, attend schools or universities, and/or receive medical or other benefits.

There are a few ways in which you can obtain second citizenship: family ties, residency programmes which lead to citizenship or through citizenship by investment.

Citizenship by investment programmes offers the opportunity to legally acquire a new nationality in return for an investment in the economy of the host country. Such programmes confer citizenship status without causing any major disruptions to an investor’s life, provided they pass all the due diligence checks first, make a qualifying investment and provide all the correct documentation.

There are many benefits to having dual citizenship, including greater global mobility, new economic opportunity, a better quality of life, and improved personal security. These Caribbean countries also offer a fair tax regime and do not have the same US tax laws.

Are you interested in a second citizenship? Send us an email on [email protected] and one of our citizenship experts will be in touch with you.