Longevity measures a given programme’s age and countries with a robust due diligence process maintain a high reputation in the industry.

Due diligence is pivotal to maintaining the international reputation of a Citizenship by Investment (CBI) Programme and encouraging transparency within the investment migration industry. How does this directly impact on the longevity of the programme?

Longevity, popularity, stability, reputation, and adaptability contribute to the certainty of Citizenship by Investment Programmes. Longevity measures a given programme’s age, and countries with robust due diligence process maintain a high reputation in the industry.

When due diligence procedures are not adhered to, a country’s reputation can attract criticism and severely impact the programme’s credibility. 2020 saw the suspension of the Cyprus Citizenship by Investment Programme brought on by suspected abuses by individuals both applying and processing applications.

What is Due Diligence?

Due diligence is crucial to maintaining the reputation of the Citizenship by Investment industry. According to the CBI Index, the Due Diligence pillar awards the most points to the country that obtains the greatest amount of information on and from its applicants before granting them citizenship.

The Index works on nine pillars that each programme is assessed upon; one of the most significant is due diligence.

Due Diligence checks are done by Citizenship by Investment Units in conjunction with certified agencies, and assessment factors include internal and external due diligence checks, police certificate requirements, fingerprinting or other biometric data collection, source of funds analysis, and bans on high-risk countries of origin (whether for the applicant, their dependant(s) or their funds).

On 13 October 2020, the Cypriot Government announced that the Cyprus Investment Programme would be suspended effective 1 November 2020. The rationale for its suspension was cited as longstanding weaknesses in the Programme and exploitation of the Programme’s provisions.

Launched in 2018, Moldova’s short-lived CBI programme came under immediate fire for its lack of transparency and inadequate due diligence. In June 2019, newly elected parliament members voted to abrogate the Programme in its first reading but were stalled by contractual obligations with the programme’s concessionaire. In July 2019, after completing only two applications, the Moldovan parliament placed a moratorium on further applications, which was extended twice until 1 September 2020.

Scoring full marks for their stringent vetting procedures, Dominica, Grenada, and St Kitts and Nevis once again topped the Due Diligence pillar.

At the same time as internal due diligence performed by Unit staff, the application is forwarded to The Joint Regional Communications Centre (JRCC) and external due diligence firms. The JRCC cross-checks all applicants aged 16 or over against regional watchlist database, Interpol databases, and checks performed with or by partner governments including the Governments of Canada, the United Kingdom, and the United States.

External due diligence firms perform online and on-the-ground checks to verify information provided in the application forms and supporting documents.

Applications will be denied if an applicant was found to have been denied a visa to a country with which Dominica/St Kitts and Nevis has visa-free travel.

The Commonwealth of Dominica

Developed in 1993 and reformed in 2014, the Commonwealth of Dominica’s Citizenship by Investment Programme has been ranked as the number one CBI initiative for four consecutive years by the CBI Index, Financial Times publication by Professional Wealth Management (PWM) magazine.

The Programme focuses on its applicants’ overall quality and integrity, only accepting outstanding charactered and reputed individuals. To ensure only credible persons of excellent standing are granted citizenship, comprehensive due diligence checks are performed on all applicants older than 18 years of age.

Aside from its vetting approach, Dominica’s CBI Unit also publishes its economic citizens’ names in the official quarterly gazette and provides a detailed budget of where CBI funds are invested. Revenue generated under the Programme is utilised to build climate-resilient housing, revolutionise healthcare infrastructure and construct the country’s first international airport. 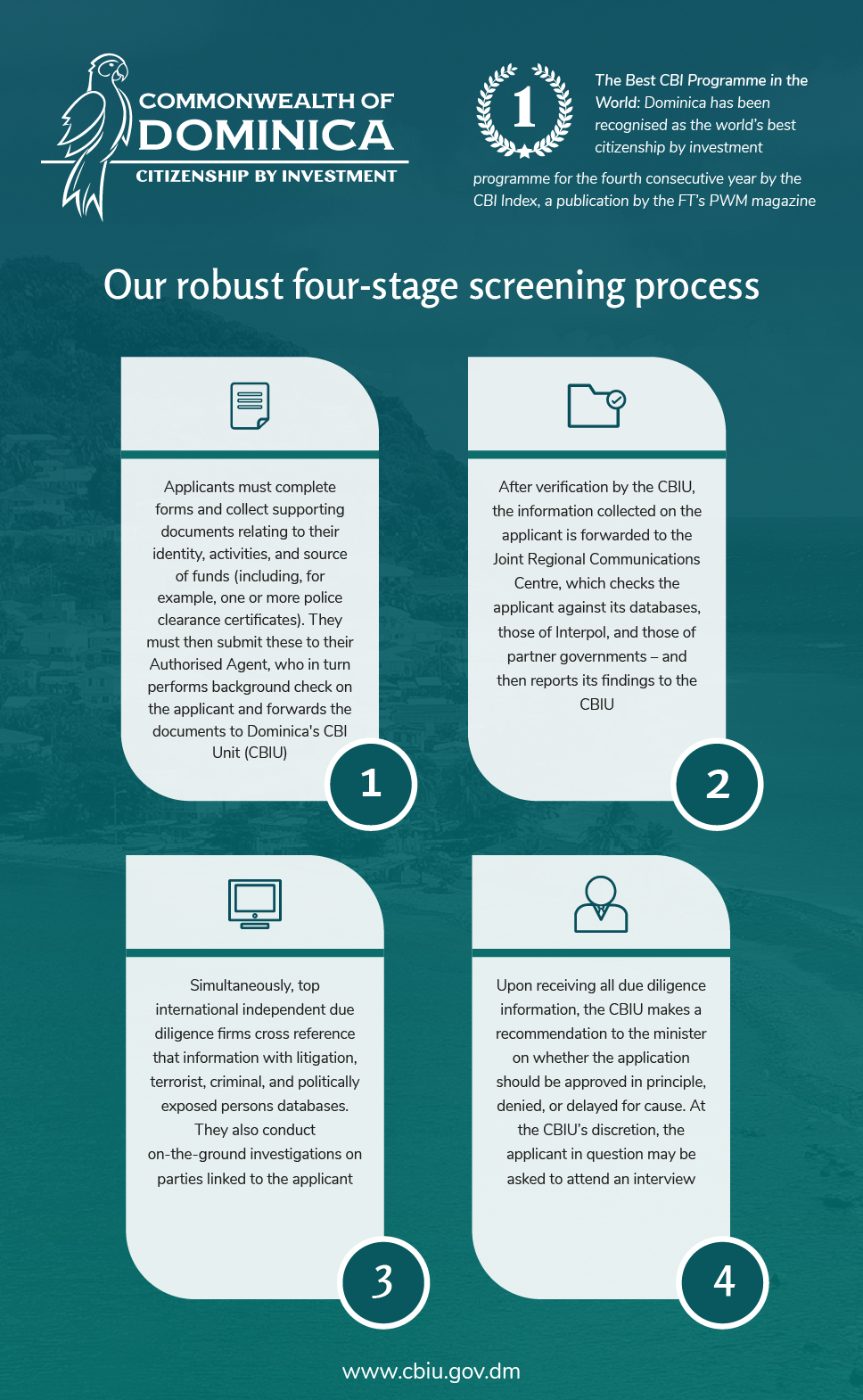 St Kitts and Nevis is the worlds’ longest-standing CBI programme globally and has been setting the standard in the CBI industry for decades. The dual island nation continues to top the list, as it meticulously maintains its commitment to rigorous due diligence. It also once again shows that it is the nation with the fastest citizenship timeline.

The dual-island nation also announced earlier last year that it would be rolling out biometric-shared background checks. This forms a compulsory part of its due diligence process that every applicant must pass to be considered for economic citizenship, ensuring thorough applicant screening.

Grenada’s Citizenship by Investment Programme has become a popular second citizenship option after restructuring, redeveloping, and re-launching in 2013.

The Government’s background check ensures each application is thoroughly vetted. The CBIC considers application files in light of this due diligence check and then issues a recommendation about the application.

While searching for citizenship solutions, always look for Citizenship by Investment programmes supported by a robust due diligence process in the country’s legislation.

Get in touch with CS Global Partners today and let us help you determine which second citizenship programme is right for you.