Vanuatu secured sixth spot in best citizenship by investment rankings for 2021, preceded by Antigua and Barbuda (5) and St Lucia (4).

The Caribbean programs again dominated CBI Index, consistently topping the rankings table for the last few years, mainly thanks to being most affordable and offering balanced passport benefits. In 2020, Dominica won again, repeating its score from 2019. Vanuatu ranked at 6 in 2020 and 2019.

European programs consistently declined due to being most expensive, and countries such as Cyprus or Moldova already closed their doors and Montenegro signing up last applications with the end of 2022.

In this situation, the offer of remote South Pacific islands called Vanuatu is becoming more and more popular and start to compete with renowned Caribbean citizenship programmes, at least regarding the cost and ‘nature-island’ lifestyle.

The World Citizenship Report (WCR) is the first-ever endeavour investigating the value of citizenship through the lens of a global citizen. Successively to about five years of research, the culmination of data has resulted in a ranking of almost every country in the world to demonstrate how they fare on the key components of:

The 2022 World Citizenship Report measures 187 countries against five motivators that are relevant amongst High Net-Worth Individuals. St Kitts and Nevis or Vanuatu is not in the top ten, but several European and Asian countries are. 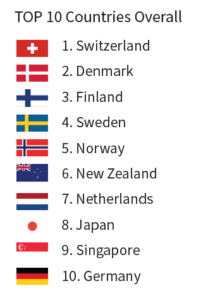 When phrases like ‘the end of the world’ or ‘the middle of nowhere’ are best describing your client’s expectations, then Vanuatu’s remoteness is its major selling point. It’s ideal for those who want the utmost privacy in a place as far removed from the rest of the world as possible. Although it’s a relatively short flight away from Brisbane, Sydney, and Auckland, it’s extremely far from the rest of the world. Apart from its remoteness, one other thing that sets Vanuatu apart is its Citizenship by Investment Programme – the only one in the Pacific region.

Vanuatu is a tropical archipelago of more than 80 small islands, where it’s about 300,000 citizens live with extremely clean air, water, and food. Official language is English, French and Bislama, but over 100 native languages and dialects are spoken across Vanuatu’s islands. Vanuatu has been independent since 1980, but just like many others island nations, Vanuatu suffers from over-reliance on just a few industries. The four main pillars of Vanuatu’s economy are agriculture, tourism, offshore financial services, and beef export.

In 2018 more than 30% of Vanuatu government revenue was raised from the multiple citizenship programs aimed at foreigners, and the figure grew up to 37% in 2019. It became the government’s biggest source of income, overtaking VAT receipts.

The government fully recognizes just how important the Vanuatu citizenship program is to its economy, but the country continues looking for new revenue streams and ways to diversify its economy.

Vanuatu has managed to get removed from the OECD’s blacklist for money laundering, but it remains blacklisted by the European Union for failing to comply with its financial information-sharing requirements. All in all, Vanuatu still has a long way to go in terms of tax framework implementation and tax collection itself, but thanks to its CBI program, the economy is not in bad shape.

Vanuatu’s Development Support Programme (DSP) is one of two CBI programmes that coexist in Vanuatu. Established in 2017, the DSP originally conferred only ‘honorary’ citizenship, which afforded successful applicants far fewer rights than those held by native and naturalised citizens. However, the DSP was overhauled in 2018 and now confers ‘full’ citizenship (albeit without the right to engage in political life in Vanuatu).

In Vanuatu, 25% of the Government contribution is due prior to the approval of the application. This deposit is non-refundable should the application be subsequently declined. In St Kitts and Nevis, payment of the investment is due only after an approval in principle, meaning that applicants do not risk losing any of the investment amount if they fail to pass due diligence.

The table below illustrates the differences in investment options between Vanuatu and St Kitts and Nevis:

In Vanuatu, as is the case in St Kitts and Nevis, main applicants are required to show they are over the age of 18 and of good character. In Vanuatu, it is also a specific prerequisite of the DSP that main applicants have a respect for the culture and the ways of life of Vanuatu and have a reasonable knowledge and understanding of the rights, privileges, responsibilities, and duties of citizens.

To prove ‘good character,’ Vanuatu conducts due diligence on applicants. Thanks to a March 2020 amendment, the due diligence process in Vanuatu now involves external checks by a specialist firm – putting Vanuatu more in line with St Kitts and Nevis.

In Vanuatu, the application process is complicated by the fact that applicants are usually required to travel to Vanuatu to take the Oath of Allegiance (however, the Citizenship Office and Commission has accepted oaths taken remotely by video link due to Covid-19).

In St Kitts and Nevis, applicants are not required to travel to either country at any point before, during, or after the application process.

Another way in which Vanuatu’s DSP can be contrasted against the St Kitts and Nevis Citizenship by Investment Programme is in its approach to family inclusivity. Vanuatu only allows a small number of family members to be included in an application for citizenship when compared to St Kitts and Nevis.

Vanuatu Citizenship Office and Commission has issued more than 4,000 passports to foreign investors so far, which shows popularity of its CBI programme. The question is which one? It’s hard to believe, but Vanuatu has launched and ran five citizenship programmes and actual number differs on which source we choose to believe. However, the two most prominent ones that run simultaneously but target different locales, are these:

• The Vanuatu Contribution Program (VCP) – it’s run by a single agent in Hong Kong and is made for clients in mainland China.

• The Vanuatu Development Support Program (VDSP) – compared above with St Kitts and Nevis offer became Vanuatu’s main CBI Programme and it’s managed by many government-approved agents around the world.

The government was aware how confusing it looked, making investors doubt the quality of the Vanuatu CBI programme, so they harmonized all their CBIs, so the features, fees and processes should all be the same now and the main steps in getting Vanuatu citizenship are:

• Pay Government Fees – pay the $5,000 application and due diligence fee.

Although the Vanuatu CBI program is pretty liberal, there are some requirements to ensure that an applicant is of good character and solid financial standing:

• You must have a spotless criminal record.

• You must be of high standing in your community, society, or country.

• You must not have lived in Iran, Iraq, Syria, North Korea, or Yemen for the past five years.

• You cannot be on any sanctions lists worldwide.

Get pre-approved
The first part of the application process is the due diligence process. This means submitting some of your main documents, a police check, and paying the $5,000 non-refundable fee for government processing and due diligence. Then, you’ll have to wait around a week to get it processed. The Financial Department of Vanuatu (FIU) carries out the due diligence process on the main applicant and his family members. If approved, there is a 99% chance you will get your passport.

Apply for citizenship
Next, you’ll have to gather up all your documents (the list is pretty standard) and submit the full payment. If all your paperwork is in order, it will take anywhere between 30-60 days for the government to decide on your application. The committee meets twice a month, so it also depends on your timing as to how long you’ll have to wait for your citizenship approval.

Take an oath, obtain passport
Different from other jurisdictions, Vanuatu requires that all its new citizens attend an oath ceremony that usually takes no longer than 30 minutes. That’s the only way a passport can be obtained, so you can’t avoid it. You have two options for swearing an oath: go to Vanuatu and do it in front of the Commissioner there or you can fly two government officials to a location nearer to your home and do it there instead.

For example, you could meet the officials in a place like London or Dubai. This option obviously involves extra fees, as you must pay for the travel and accommodation of the Vanuatu officials at your nearest Consulate. After the ceremony, you will be issued a Naturalization certificate, which will allow you to apply for and obtain a passport from Vanuatu.

What if getting a Vanuatu passport is too much hassle for your client and investing in real estate is more preferable than donating money to a government?

To qualify for permanent residence in Vanuatu, your client must purchase real estate worth at least $100,000 and has a monthly income of at least $2,500. This will allow your client to enjoy all the benefits Vanuatu residency brings, including zero percent tax, pristine beaches, clear air and water, and remote location.

After 10 years living in Vanuatu as a permanent resident, one can eventually become a naturalized citizen of the island.

• Passport in 2 months
The streamlined process takes only 8 weeks – from the lodging of application to holding a new passport.

• Only pay when pre-approved
Unlike other jurisdictions, you’ll only have to pay the full investment price after you get pre-approved for a passport from Vanuatu, making it a less risky proposition.

• Go off the radar
Vanuatu is one of the most remote countries, far removed from the world’s troubles and worries. It’s also a politically neutral country that promises complete anonymity, so you can fly off the radar.

• Optimize your tax
Become a tax resident of Vanuatu and take advantage of its favourable tax regime: no income tax, no inheritance or capital gains tax, and more.

• Your family can come along
The main applicant can add a spouse, all their dependent children, and even their parents to the application for Vanuatu CBI.

• Great lifestyle opportunities
Visiting or living in Vanuatu? It’s been rated as the Happiest Place in the World for over a decade now, offering a great lifestyle.

• Pass it on
Vanuatu’s citizenship is hereditary, so all of your children will be born into it, giving them more options for a brighter future.

• There is no language or Vanuatu residency by investment requirement
You won’t have to attend any in-person interviews or brush up on Vanuatu’s history. The people of Vanuatu also speak decent English.

• Further investment opportunities
Vanuatu is an island paradise; purchase an island of your own or a beachfront villa to enjoy some of the most pristine natural environments on the planet.

To get advice on investor immigration options, feel free to contact us for a consultation.
CS Global Partners has a team of experts with heaps of industry knowledge to help you decide what country and citizenship or residence programme may suit you best.