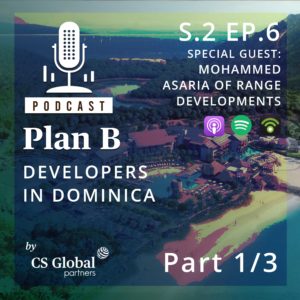 On today’s show we welcome Mohammed Asaria, the Managing Director and Board Member of Range Developments, an international hospitality development company that develops luxury resorts in the Eastern Caribbean thanks in some part to the funds received through local citizenship by investment programmes. Mohammed is also a frequent contributor on CBI and related topics in a number of media channels.

Aisha Mohammed: Kempinski Hotels is Europe’s oldest luxury hotel group. Based in Geneva, it now operates more than 75 5-star hotels in 31 countries. What made Dominica an appealing choice for Range Developments, and for the Kempinski brand?

Mohammed Asaria: I was first invited to the island of Dominica in 2014 and really it was love at first sight. Dominica is an incredible Island. It offers a very different experience for the luxury traveller. There are all sorts of hiking activities, all sorts of water-based activities, it really provides the luxury traveller a very different opportunity than your typical Caribbean vacation of a lazy beach holiday.

There is so much more to do which really is something which appealed to us, appealed to the Kempinski brand, and appeals to the tourists.

We’ve already reopened the hotel in Dominica. We reopened on the 15th of July. We’re looking forward to the international flights coming back in from the 7th of August and it’s been attracting tourists regionally and we hope it continues to do so.

Dominica, as with St Kitts and Grenada, has a second citizenship programme.

Its citizenship programme has become one of the leaders globally. Also, it’s a great investment opportunity. And more so, it’s a very efficient and cost-effective way of providing that security for you and your family’s future.

AM: How has the Cabrits Resort & Spa Kempinski impacted the tourism industry in Dominica? What changes has it brought?

MA: The Kempinski has really put Dominica’s tourism industry on the map.

As one of the world’s leading luxury brands, as you described, with 75 five-star hotels in 31 countries. And in fact, Kempinski is Europe’s oldest luxury hotel group. We were very proud to partner [with Dominica] and the fact that we’re their first hotel in the Caribbean, in the lovely island of Dominica, has meant a lot for the island of Dominica. It’s really put it on the map in the eyes of the luxury tourist.

Obviously, there’s the employment, direct and indirect. The level of hospitality training that we’ve engaged has been significant and that’s not something which you do on opening day. That’s something you do for 12 months prior to opening day. So, there has been a lot of engagement with the local community on training as well as a lot of engagement with local businessmen, local entrepreneurs.

We definitely try to buy locally first so you see benefits across the island, not just in the town of Portsmouth, where Dominica is based. We have tour operators from whether it’s Salisbury or Roseau, vendors from the south of the country. The impact is really being felt across the island, which is so pleasing to see.

AM: The Cabrits Resort & Spa Kempinski in Dominica was the first CBI approved real estate project on the island. What did this mean for it and its investors?

MA: We were privileged to be invited to develop by the Government of Dominica, in I think it was 2015. We entered into our development agreement with the government in the same year. We started construction in 2016 and we opened the hotel in 2019. I’m very proud of my construction and design divisions that they were able to achieve that milestone withstanding to pretty serious natural disasters.

In the intervening period we were able to open on the 3rd of November, which coincides with Dominica’s Independence Day in the year 2019.

We have the first approved project and we were the first to open which I think has been great. A lot of individuals have trusted Range Development and trusted the Dominican citizenship programme and obviously the Kempinski brand added to that. But you know, we have a reputation, so I hope that says a little bit about us and Dominica.

AM: Can you give us a quick rundown of the investment process for listeners wanting a better idea on how to be involved with the project?

MA: In terms of an investor who wants to be involved in the in the project, once they have made the decision to proceed, they’re investing in a real estate investments trust structure which owns the relevant hotel.

They’re acquiring one unit in that real estate investment trust structure. They pay the deposit which is ten percent of the investment amount. The investment amount is $220,000. Subsequently, they fill in all the forms, submit their citizenship application to the citizenship by investment unit in the country. They pay the due diligence fees required at the outset and then a period of three to four months later, the citizenship by investment unit makes an adjudication on that individuals background and hopefully decides to award them with citizenship. At that stage, the investor is required to pay the balance and 90% as well as the government fees, which is stipulated to be paid upon the approval. The relevant investor needs to keep that asset for the next five years in accordance with the law of the island, and thereafter, he may sell that unit to another investor who also wishes to apply.

So, there is a clear path to exit on the investment. During the life of the investment, the investor obtains a cash-flow based on the hotel’s performance. So it’s not only a financial yield. But in addition, the investor is entitled to spend a period of time at the resort which permits in with some very nice benefits.

AM: How has the Kempinski implemented climate-resilient practices in Dominica?

MA: We know Dominica is subject to certain natural challenges in terms of windstorms. If you visit the Kempinski, you’ll see that the hotel is built to comply with all international standards in terms of windstorms. It’s designed to comply with Category 5, the highest level of international protection as far as windstorms are concerned, and whether that’s the choice of our roof tiles, whether that’s a thickness of our glass or the choice of other materials, all of that has really been thought out and there is no substitute to that.

Yes, there is an added cost to all of that. But if we’re building something sustainable, which will stand the test of time, all of that needs to be done. I mean adding to that for example, if you see our site in St Kitts, we have to raise the site by close to a meter and a half to ensure that if there was a storm surge or one in a hundred years storm, that our project would not be wiped out. And again, it’s all about building something which can stand the test of time. The foundations have been designed to comply with all the systemic codes. If you look at the roofs of the buildings in the Kempinski, there are some solar power heaters on the solar panels and it’s not just in terms of climate resilient practices. The whole concept of sustainability is built into the ethos of our operators and that can really be seen in some micro things. For example, no one’s using those single use plastic disposable shower gel bottles anymore. You buy the soap from the local community and fill up permanent bottles that dispenses. So, it’s also all about reducing the wastage of the hotel producers as well.

AM: What steps could be taken to ensure that real estate developments are built to the spec and timeframe that is expected of them?

MA: I think it was very pertinent to investors in the citizenship by investment sector at Range when we embarked on a project. We, first of all, make sure it’s executable. So, we do all our design. We do all our feasibility and we ensure that the end product has the ability to materialise before we even go out and start marketing to investors who are looking for a second citizenship option. In fact, it was about a month ago that I wrote a piece on this which was published in one of the industry periodicals, which was titled “Iron five rules for investors who don’t wish to lose money on Caribbean citizenship projects” and really a lot of them just come down to common sense. Make sure that the developer has enough equity, make sure the developer owns the land, make sure the developer knows how to build.

The Caribbean islands are wonderful and enchanting places, but you have to recognise that not very much is made locally, and in terms of the local construction, workforce experience in building 5-star hotels is indeed limited. So, I mean if you look at the Kempinski, there were half a million individual items which needed to be procured from 2000 suppliers. I mean that is a logistical nightmare and I have a fantastic team which managed that all the way through, but it needs experience. It’s not all about just having a well-known brand or putting up a structure, anyone can put up a concrete structure. That’s only 20 or 25%.

When some is telling you that this hotel is opening next year, can you see the mechanical installations? Can you see the electrical work? Can you see the plumbing? It’s not just all about seeing nice glossy pictures which is unfortunately a lot of the way the marketing is done. Are you recruiting staff? What is your training policy a general manager? A first-time developer must be on-site 18 months before.

So, if someone is saying to you that we are opening next year, awesome, see the CV of the general manager, see the CV of the director of sales and marketing. Even book a hotel online because hotel engine bookings open six to nine months before. Even ask to see designs, ask if someone saying their opening next year, ask them to show you the mechanical design or the electrical design or the furnishing design and really quiz the developer on some of these basics and then I think you will be able to decide easily whether that’s a project which is intended to complete or that’s a project which is going to have difficulty completing because the individuals lack the necessary experience.