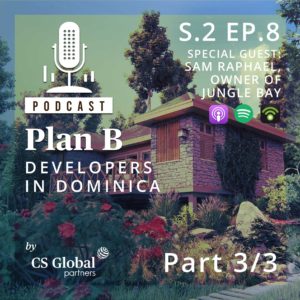 On this episode of Plan B, host Aisha Mohamed speaks to Sam Raphael, Dominican born entrepreneur, and sustainable development activist. Raphael is also the CEO of Jungle Bay, an award-winning, adventure, and wellness boutique retreat resort located on the Nature Isle of the Caribbean.

Aisha Mohamed: Can you describe the property? What does one see hear and feel when they arrive at Jungle Bay?

Sam Raphael: The name says it all. They see a jungle island, certainly even before they arrive at the property. But Dominica, as you know, is a thousand shades of green. It’s a rainforest island, and we’re nestled. We overlook a fantastic bay. We see the bay from virtually everywhere on the property. We’ve preserved it as best as we could. Everything is constructed from earth materials. So, it’s all volcanic stone and tropical hardwoods with the shingles. It has a very rustic feel to it, but it’s done in a very tasteful manner. We’ve got great swimming pools that overlook as I said the bay, we’ve got two yoga studios.

We’ve got a wonderful spa with 13 rooms. We’ve got two restaurants that serve tremendous Caribbean and international healthy cuisine because we’re positioned as a health and wellness property. Then we have the accommodation villas that are again all made of stone and wood and shingle, and they are all overlooking the Atlantic Ocean.

You see lots of tropical fruit trees. We try to create a sort of an environment that’s all organic. When you walk out of your villa, you pick papayas, mangoes, guava, cherries, and just all types of exotic tropical fruit. It’s a Garden of Eden in Paradise.

AM: We understand the idea for Jungle Bay came to you at a very young age when you were in the fifth grade. Can you tell us a little bit more about that?

SR: As a lad, I went camping to a tropical rainforest island, and we stayed at a campground, and it just was so amazing doing all the hikes and learning about the environment. That stayed with me throughout my childhood. And so, when I had the opportunity, I decided to come back to Dominica and do the campground and so that’s the genesis of Jungle Bay.

But as it progressed, and as I got deeper and deeper into the business side of it, it ended up being a little more upscale than the original campground that I had in mind, but I still kind of kept it very natural, kept it very much a wilderness type feeling where people could come and reconnect to nature.

AM: You’ve adopted the concept of conservation and environmental preservation as your life’s philosophy. How has this channelled into that of Jungle Bay?

So [Jungle Bay] kind of lends itself to that philosophy. So, I came back to Dominica and tried to, on a commercial scale, develop a brand of tourism that the island I thought was naturally positioned for and thus, we came with Jungle Bay. And the project has done very well. It’s evolved over time, but still keeping true to the environment as a key focus.

Other areas that you know are important, and again, back to my African-Caribbean heritage. So, to speak, try to develop Jungle Bay, and we were really built around the people, around the communities, and around the livelihoods of the people of the communities. And so, the people of Dominica engage in traditional artisan type activities, a lot of rural agricultural activities. And so, we created jungle Bay, as a vehicle to allow these people to preserve their way of life while earning their livelihood from providing supplies to the hotel.

We buy all our produce and our fish and virtually everything we serve from the communities. Also, other activities that the community are engaged in – whether it’s dealing with herbs, because Dominica is big on herbs or other types of holistic livelihoods – we incorporate that into Jungle Bay. It’s where you learn about nature and where you engage in activities that support the local community. There is also a strong element of wellness tied into that.

AM: Especially now, as the climate crisis is at Dominica’s is doorstep, and the mainstream tourism companies are adding to the equation with rigorous building, how important is eco-friendly tourism to keep the industry sustainable?

SR: Well, you mention one thing, and that is the climatic conditions that seem to be deteriorating, especially with human intervention. But we also have the COVID-19 phenomena, which is also something that has added a sense of urgency to this. We now have to change the way we do things.

The traditional ‘Let’s see how close to the ocean we can build,’ and ‘how many trees we can fall’ in the process to create areas where people can come and get sunburned, that type of tourism, we’re learning is not something that’s sustainable. It is not something for the people of the future because we don’t want to get sunburned. We need to recognise that we will need places to live where we’re not going to be overrun by tidal waves. So, we’re kind of stepping back from the shoreline. So, to speak, we’re looking at our water flow in development.

This is just overall, not even specifically related to sustainable practices, but just now all developers need to move with some level of urgency towards the preservation of the environment. And so, I think we were right on point in being in this movement early on. Now that we have COVID-19, I think the aftermath of the pandemic will be that people will again be looking for things that are natural and safe.

Safe in ways in which they can reconnect to nature. They will want to go into a paradise that’s free from stress and the challenges of the time. I think it’s key and this is becoming more of a commonplace, and hopefully, we can encourage other players to follow suit.

AM: Jungle Bay is an approved project under the CBI Programme. When was it approved, and what does this mean?

SR: We got approval in 2016 and what it means is that persons who wish to be a citizen of the Commonwealth of Dominica, can obtain a passport from Dominica, which allows for tremendous visa-free travel and security. Those persons can invest in Jungle Bay and be a part-owner of this development and obtain their citizenship that way, and that means that down the road, they will be getting a return on investment. They will have an investment to hold that ultimately if they choose, they can after three years, if they wish to, they can resell their investment and still retain their citizenship.

AM: Jungle Bay is now in full operation. What are the CBI investments you’re receiving now being spent on?

SR: The Jungle Bay’s Phase 1 is in full operation. Phase 2 is still under construction. So, the investments that we’re receiving is going towards the completion of Phase 2, which we expect to complete and have fully operational for the start of 2021. So that’s where the remainder of the investment is going.

AM: A couple of years ago you said, “All Dominicans, we are the assets of this country and it’s about bringing us together and doing something about your country.” And as a Dominican, do you see support from locals for economic citizens of the country?

SR: Well, it’s something that people are beginning to express more favourably now because they see the tangible benefits from the CBI Programme. I think universally, in the Eastern Caribbean, CBI is accepted by the general population. But I think the more the people see the tangible benefits to themselves, not just as employment, but in terms of being able to have small businesses in Dominica, for instance, we have CBI funded affordable housing we have so much of our infrastructure being funded under CBI.

We’ve been faced with a couple of hurricanes, and much of the recovery resources came from CBI. And so, CBI resources became a tool to improve the lives of the people, and the people recognise it. We see gravitation, a movement towards approval and acceptance.

All of this is a means of economic development for the island. So, based on those things and based on my sentiment, this is what I get from the persons. I think there is a significant level of support for CBI. I think most people approve of the program because we realise, and we feel the benefits of the Programme.