The Road to Prosperity: Secure Your Future with Second Citizenship of Dominica

The Road to Prosperity

In today’s increasingly volatile climate, many high net-worth investors across the globe are looking for a means to secure their future while accessing greater freedoms. With COVID-19 negatively impacting the global economy, and political unrest bubbling in many parts of the world, it has become abundantly clear that unpredictability may be the new normal. This has bolstered wealthy investors to look for a plan B.

Russians are no different. Many of the nation’s wealthy population seek to protect their wealth from economic and political uncertainty and in the last few years, acquiring a dual citizenship has become an increasingly popular route to achieving this.

Also Read: The Advantages of Having Dual Citizenship

On February 24th, Forbes Russia held a webinar in partnership with CS Global Partners to discuss why Dominica’s Citizenship by Investment Programme provides the perfect solution to Russian investors. Titled “The Road to Prosperity: Securing Your Future with a Second Citizenship in Dominica,” the webinar was hosted by Prime Minister Roosevelt Skerrit, Ambassador Emmanuel Nanthan, the Head of Dominica’s Citizenship by Investment Unit, and Micha Emmett, CEO of CS Global Partners.

Discussions revolved around the Programme’s requirements, the opportunities it provides and the wide range of benefits that investors can unlock once receiving citizenship. This includes increased freedom in several areas.

In a world inundated by lockdowns, travel has been increasingly restricted for many businesspeople. A dual citizenship can offer a wider-set of visa-free access to major business hubs from Europe to the United Kingdom. 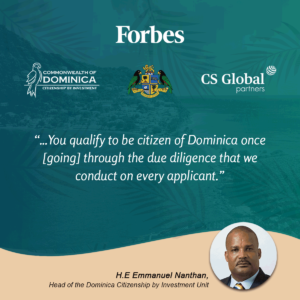 For the modern businessperson, accessing new markets can make all the difference in keeping business competitive. Visa-free access drastically reduces the wait time that is required for applying for visas and dealing with the bureaucratic hassle.

Dominica facilitates a healthy business environment for entrepreneurs and business-minded individuals. During the webinar, the Prime Minister Skerrit highlighted how the constitution protects its citizens by safeguarding property from being expropriated from the state without due compensation and having a right to proper legal recourse.

Additionally, Dominica is part of several lucrative trade agreements: “We are also part of the Caribbean community, and we have an arrangement with the European Union. We just call it an Economic Partnership Agreement, which allows goods and services produced and manufactured in Dominica to have duty free access to every single European country,” Prime Minister Skerrit noted. 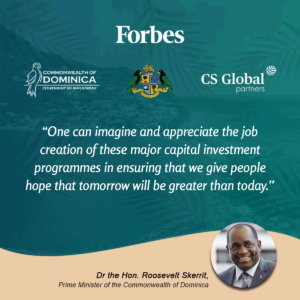 “And with the United Kingdom having removed itself from the European Union, Dominica concluded late last year a similar agreement with the UK government, which allows for the similar treatment of goods and services manufactured and produced in Dominica to have duty free access to the United Kingdom,” he added.

For many Russian families, accessing high-quality education is a motivator for acquiring dual citizenship. With a Dominican citizenship, students have a wider range of options when pursuing higher education both on the island and abroad. The island has recently opened a state-of-the-art university entirely dedicated to the veterinary discipline which is listed under the American Veterinary Medical Association.

Introduced in 1993, Dominica has been ranked as offering the world’s best route to second citizenship by the Financial Times’ PWM for the last four consecutive years. The annual CBI Index scored the programme highly for its minimum investment outlay, due diligence, ease of processing and certainty of product. With nearly three decades of experience within the investment migration realm, Dominica’s programme has stood the test of time, evolving with the needs of the market and providing an attractive route to dual citizenship.

“With Dominican citizenship, you are able to access major business hubs globally. The opportunity of educating children in foreign institutions, in world-class places, is important. With a strong constitution that Dominica has, it respects its citizens, and it respects the rule of law, and I think in today’s times, particularly in 2021, this is important,” Micha Emmett noted. 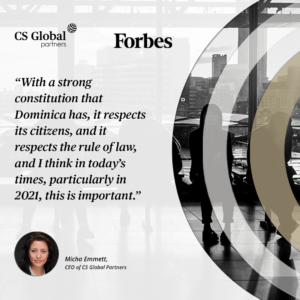 For more information or to get in touch, contact us at [email protected]

‘Finding Certainty with CBI in Dominica’ Webinar on April 2nd

Join our exclusive webinar with details about how you can apply for second citizenship from the Commonwealth of Dominica. Featuring...

Due diligence is crucial to maintaining the reputation of the Citizenship by Investment industry. Dominica ensures that outside of its...